SPA Group: Crafting luxury environments for you since 1972 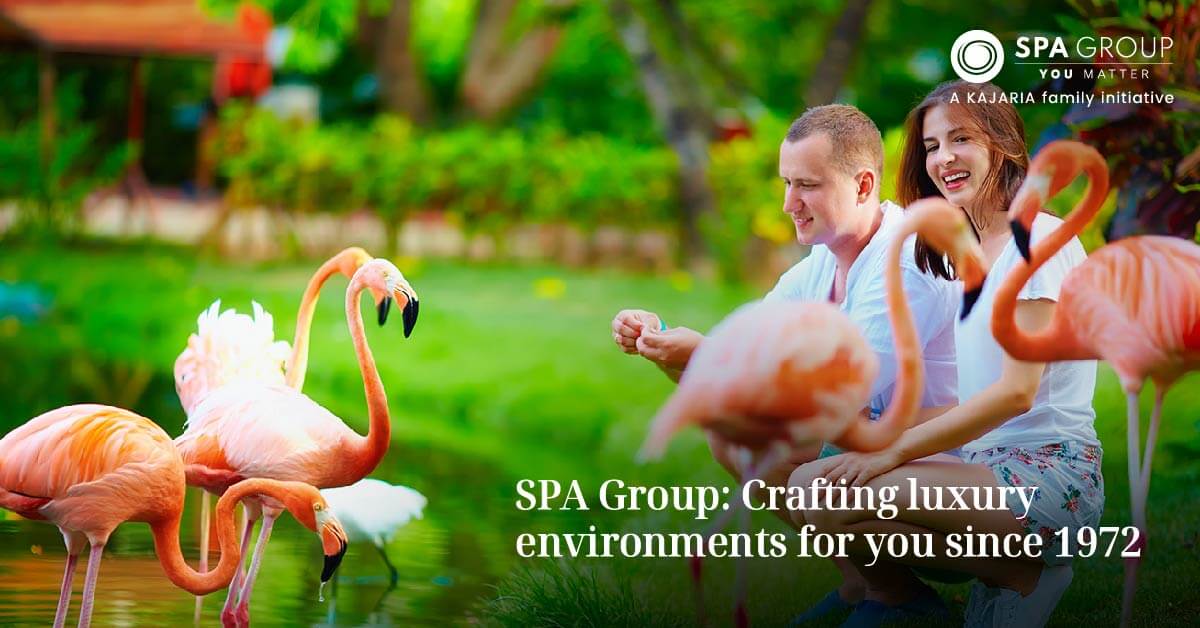 ‘Why exist when you can live?’ This single statement describes the core philosophy of the SPA Group where its customers, i.e. ‘You’ matter. For eight decades, the group has nurtured this philosophy and has delivered products that resonate with quality, innovation and sustainability. Every industry that the group has worked in, and every product it has developed, has stood the test of time and quality to create a severe and impactful value proposition that matches the customers’ requirements.

The SPA Group’s rich legacy is being spearheaded by three astute personalities. Sushil Kajaria, Chairman; Prashant Kajaria, Managing Director; and Amit Kajaria, Director of SPA Group, helm the leadership role at the organization to bring the innovation directly to the customers.

Over the course of all these years, this legacy has been a debt-free, economically stable, progressively viable enterprise with operations in real estate, liquid warehousing, agricultural advertising, power storage, green technology, and horticulture. Especially in the real estate, where the group has revamped natural living with SPA Ecocity and Frangipani.

The brand legacy of the SPA Group spreads across a variety of industries, including Real Estate, Liquid Warehousing, and Horticulture. Let’s see them one by one.

The SPA Group commenced its Real Estate journey back in the 1960s. Starting from Kolkata and now in Bangalore, the group erected luxurious real estate projects and, over time, realised the industry’s true potential. The Group no longer wanted to create homes just built of walls but wanted to craft an environment where experiences could reside, and people can call it home. Therein, the Group began a new journey of offering designed home experiences where people could live with meaningful experiences. And in no time, the group has redefined the way people lived in homes, and this much development let the firm become one of the most sought-after real estate developers in Bangalore.

As a prominent builder in Bangalore, the group has two notable mega projects spread over 85 acres, where customers can live life to the fullest.
Frangipani Estates offers its customers a rare chance to live a life that is beyond the ordinary. Built only for 33 exclusive families, it provides luxury estates starting 20,000 to 40,000 sq.ft., with 2 acres of a Clubhouse, 2 acres of Private Lake, 2 acres of Rejuve Park, and 1 acre of Palm Forest.
SPA Ecocity: Designed as the future of smart living, SPA Ecocity offers a chance to live in the perfect blend of luxury and the lap of nature. Off Sarjapur, Ecocity offers ultra-luxury villa plots community spread across 50 acres with salable space of 1.2 million sq.ft. along with 9 Themed Parks, 5 Star Resort, spread over 6 acres, and 55% Open Space for a holistic living.

The Group introduced its Liquid Warehousing division & their flagship business, SK Oil Terminals, in 1972. Located in Budge Budge, Kolkata, this terminal has revolutionised energy storage needs in a sustainable, efficient, and strategic way. Powered by world-class infrastructure, modern firefighting systems, and tanks under A, B, and C category licenses, the SPA Group provides holistic solutions for energy businesses’ needs. Today the terminal boasts of whooping 140-million-liter capacity, the largest in the eastern India & among the top 3 in the country.

Two decades after the inauguration of SK Oil Terminal, the SPA Group once again grabbed the opportunity to shine in the face of innovation and launched SPA Agro in 1993. With headquarters in Bengaluru, the agro unit has been importing greenhouses from the USA, irrigation and planning materials from Israel, and cold storage from Italy. Since its inception, the group has pioneered sustainable living and leverages the powers of horticulture and floriculture to transfer its purest form into its offerings of Real Estate.

Whether it is Real Estate, Horticulture, or Liquid Warehousing, the SPA Group has transformed the way people have lived in the last eight decades. Its wide breadth of experience, expertise, and will to innovate has kept human life at the centre of everything. Ecocity & Frangipani are now a testament to its journey and truly speak for the Group’s legacy of crafting luxurious experiences since 1972.

1 comments On SPA Group: Crafting luxury environments for you since 1972

Creating luxury environments and building sustainable infrastructure for generations to enjoy since 1972.